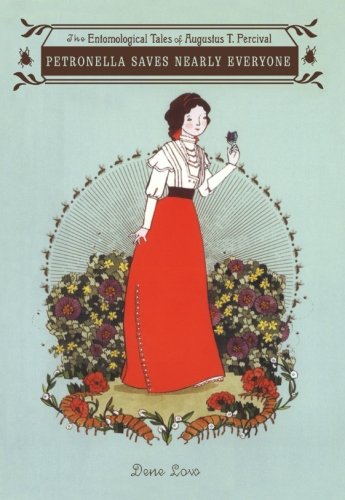 Petronella Saves Nearly Everyone
Dene Low
You would think Petronella’s sixteenth birthday would be cause for celebration. After all, fashionable friends are arriving at her country estate near London, teas are being served, and her coming out party promises to be a resplendent affair. Everything is falling nicely into place, until, suddenlyit isn’t. For Petronella discovers that her guardian, Uncle Augustus T. Percival, has developed a most unVictorian compulsion: He must eat bugs. Worse still, because he is her guardian, Uncle Augustus is to attend her soiree and his current state will most definitely be an embarrassment.During the festivities, when Petronella would much rather be sharing pleasantries with handsome Lord James Sinclair (swoon), important guests are disappearing, kidnapping notes are appearing, many of the clues are insects, and Uncle Augustus is surreptitiously devouring evidence. It’s more than one sixteen-year-old girl should have to deal with. But, truth be told, there is far more yet to come . . .
1 Vote

Sixteen year old Petronella's life get hectic really quick at her birthday party. Her Uncle Augustus starts to eat bugs and two important guests also get kidnapped. So she and her friends go searching for the kidnappers and the missing guests. Along the way they figure out what made her uncle want to eat bugs and why they tasted so good. They find clues to help them solve the mystery. It is an action packed book.