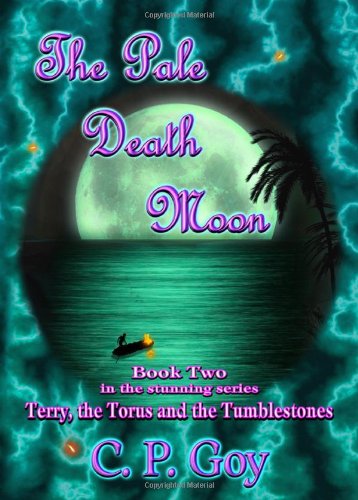 The Pale Death Moon
C. P. Goy
In Book One, The Seven Stones, young readers were caught in the exciting adventures of Terry, Gwen, Meeska and Polka as they set out on their quest. Remarkably, many parents have been entranced too, and the adult fan base is equally large, enthusiastic and impatient for Book Two. Now, in The Pale Death Moon the adventure continues. The Torus has saved Terry, Gwen, Meeska and Polka from the Baron's secret police, but abandoned them in a completely new world. Three more riddles must be solved - three more stones must be found. But it's not going to be straightforward. The evil Ackru has already stolen one of the stones and now he is making sacrifices each full moon to appease the black spirits who have started to appear on the island. Polka is going to need his best plan ever, because Ackru has a hostage, and the next full moon is only three nights away... Expected to sell out at all book signings and author events, and with an exciting interactive competition running in tandem with the launch of The Pale Death Moon on www.terry-torus-tumblestones.co.uk - make sure you are part of the adventure!
1 Vote

Terry and his friends have been whooshed into another world by a taurus(a kind of portal). They landed in a world on the edge war - a group of people broken away from their leader, who's started sacrificing blood offering to the "black spirits", finds Terry and his friends. They bring them in telling them that their old friends, Yalf, foretold their coming and that they (the people) were to help them. Terry requested their help finding the 3 tumblestones hidden in their world - one of which has reportedly fallen into the hands of their evil leader, Akru.