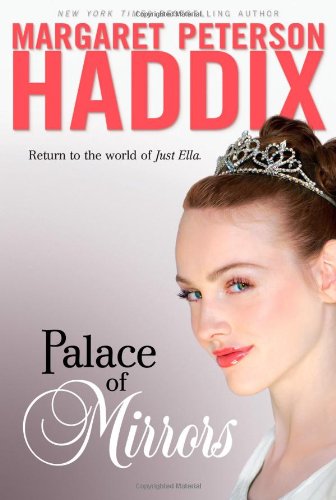 Palace of Mirrors
Margaret Peterson Haddix
Cecelia looks like a peasant girl and lives in a village so small that it's not even on the map. But she knows that secretly, she is the true princess, hidden away as a baby to be kept safe from the enemies of the kingdon. A commoner named Desmia was placed on the throne as a decoy. Cecelia has always known that when it was safe, she would be taken out of hiding and returned to her rightful place on the throne. Then danger finds her in her village, and Cecelia has to act. With the help of her best friend Harper, she decides to take matters into her own hands, relieve Desmia of the the crown, and take up her own rule. But when they venture from their small village to the capital city and into the famed Palace of Mirrors, Harper and Cecelia discover that all is not as it seems, and that they have placed themselves in more danger than ever before.
1 Vote

Cecilia lives as a peasant in a small town. But, secretly, she knows that she is princess who is being hidden from the enemies of the kingdom for her safety. It's a normal day in hiding for Cecilia, who is out with her friend Harper. But she feels like her enemies are following her. She decides it is in her best interest to go to the palace, reclaim her throne, and take over her duty as princess from the decoy princess Desmia. Once Cecilia gets to the palace, things get strange. She is introduced to other girls just like her who claim that they are the true princess.