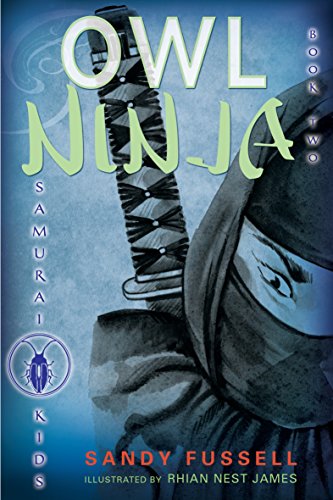 Owl Ninja
Rhian Nest James, Sandy Fussell
The uniquely talented samurai kids are back — and ready to join forces with a ninja clan! — as the fast-paced martial arts series continues.(Ages 9-14)Across the valley, a drumbeat echoes. For ten days, the drum will call the mountain ryus to war, including the samurai kids from the Cockroach Ryu. Only Japan’s feudal emperor can stop the war, so Niya and Sensei Ki-Yaga set off on a grueling journey with all the Cockroaches, whose firm friendship and unusual skills must be put to the test in order to beg the Emperor to maintain peace. Sensei Ki-Yaga is respected and wise, but unfortunately, the last time he encountered the Emperor, the Emperor threatened to cut off his head. All seems hopeless until Ki-Yaga guides the Cockroaches to meet with the Owl Ninja clan. Samurai and ninja are supposed to be enemies, but can these two groups somehow work together to save the sensei and stop the battle in time?
1 Vote

The book Owl Ninja is a book is about samurai in training kids that are disabled. Niya with one leg, Taji who is blind, Mikko with one arm, Kyoko who has six fingers and toes, but some of the kids have no problems. In this book, one day comes when the kids hear a drumbeat, calling them to war with the dragon Ryu, but the Cockroach Ryu goes to the emperor to stop the war. On the way, the kids meet Ghosts, acquire ninja skills, and meet a ronin with a battle strategy of losing his pants. What happens to the cockroach Ryu? Does the war stop? Find out in this awesome book!