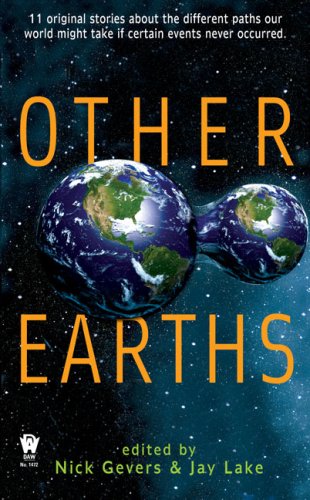 Other Earths
Nick Gevers, Jay Lake
Eleven original stories about the different paths our world might've taken... Alternate history explores the many possible directions our world could follow if certain key events didn't occur at all or were changed in some crucial way. Is our Earth the only Earth, our reality the only one that exists? Or are there many parallel worlds and societies, some very similar to ours, some barely recognizable? What if... Lincoln had never become president, and the Civil War had never taken place? Columbus never discovered America, and the Inca developed a massive, technologically advanced empire? Magic was real and a half-faery queen ruled England? Hitler and Germany won the war because America never got involved? Many of the world's religions were totally commercialized, their temples run like casinos, religions deisgned purely for profit? An author discovered a book written by an alternate version of himself?   These are just some of the possible pathways that you can take to explore the Other Earths that may be waiting just one event away... This anthology includes stories by: Robert Charles Wilson — Jeff Vandermeer — Stephen Baxter Theodora Goss — Lizz Williams — Gene Wolfe Greg Van Eekhout — Alastair Reynolds — Paul Park Lucius Shepard — Benjamin Rosenbaum
1 Vote

This book is a collection of short stories that focus on the subject of alternate universes. Starting off with a story about what life would be like if the civil war never occurred, we than are introduced to a world where an alternate universe machine is invented. The next story tells of what might have happened if the Incas were never conquered and developed an advanced empire. Following that is a tale about a world where magic exists and the people who posses it are segregated, and than another story about magic, in a entirely different universe.