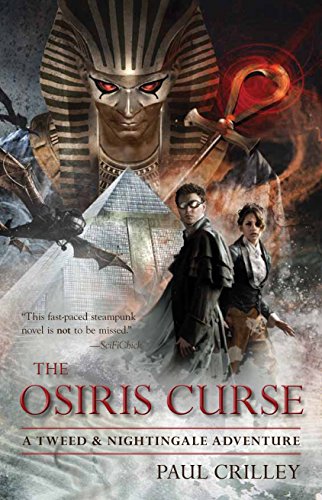 The Osiris Curse
Paul Crilley
Steampunk Sherlock Holmes meets The X-Files with a dash of romantic tension and a large dose of adventure.       When Nikola Tesla is murdered and blueprints for his super weapons are stolen, Tweed and Nightingale are drawn into a global cat and mouse chase with his killers. What's more, it seems that the people who shot Nikola Tesla are the same people responsible for Octavia's mother's disappearance. As the two cases intertwine, Tweed and Nightingale's investigations lead them to a murdered archeologist and a secret society called The Hermetic Order of Osiris. Fleeing the cult's wrath, they go undercover on the luxury airship, The Albion, setting out on her maiden voyage to Tutankhamen's View, a five star hotel built in the hollowed-out and refurbished Great Pyramid of Giza.     In Egypt, the duo begin to unravel the terrible truth behind Tesla's death, a secret so earth-shattering that if revealed it would mean rewriting the entire history of the world. But if the cult's plans aren't stopped, Britain may lose the future.
1 Vote

The Osiris Curse is the second book in the Tweed and Nightingale Adventure series by Paul Crilley, which centers around two teenage detectives in London. The story follows Sebastian Tweed and Octavia Nightingale's investigation of the death of Nikola Tesla, the infamous engineer credited with inventing the Tesla coil. While investigating the crime, they find a potential correlation between the murder of Tesla and the disappearance of Nightingale's mother. Along the way, the friends encounter romance, secrets, villains, and new friends.