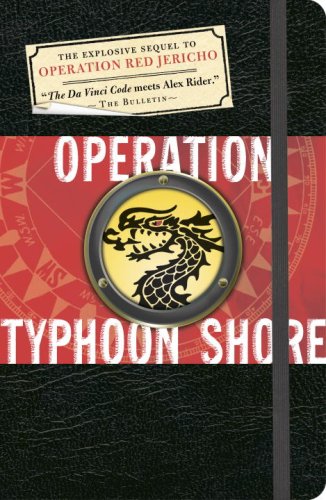 Operation Typhoon Shore
Ben Mowll, Julek Heller, Niroot Puttapipat, Joshua Mowll
Get ready for Book II of the thrilling, novelty-packed Guild of Specialists trilogy.After being lashed by a typhoon on their uncle's ship, THE EXPEDIENT, intrepid siblings Becca and Doug MacKenzie want nothing more than to escape from the volcanic island on which they're stranded and resume the search for their parents. But their uncle, Captain MacKenzie, seems more concerned with the missing gyrolabe than their missing mother and father, and he refuses to discuss the role the mysterious Guild of Specialists played in their disappearance. As the formidable Kalaxx warriors close in on their hidden cove, Becca and Doug unearth a riddle linked to a 1533 painting, which may hold the key to the Guild's dark secrets and to finding their parents. But how can they possibly solve the puzzle and escape with their lives — before their enemies attack?
1 Vote

Doug and Becca MacKenzie are traveling on a ship to a remote island with their uncle on one of his missions. Their uncle, the captain of the ship, is involved in a special organization called the Guild of Specialists and right now his mission is to gather four missing artifacts whose purposes are unknown to the young MacKenzies. Doug, eager to join in the action swears into his uncle's Guild, but Becca declines.