Open Mic: Riffs on Life Between Cultures in Ten Voices 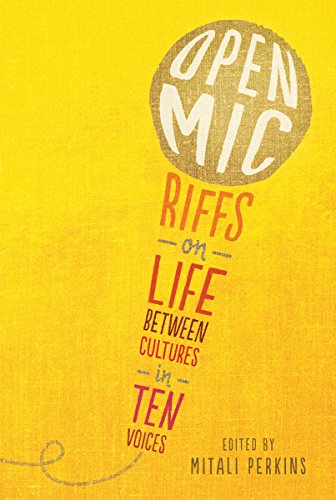 Open Mic: Riffs on Life Between Cultures in Ten Voices
Mitali Perkins, Various
Using humor as the common denominator, a multicultural cast of YA authors steps up to the mic to share stories touching on race.Listen in as ten YA authors -- some familiar, some new -- use their own brand of humor to share their stories about growing up between cultures. Henry Choi Lee discovers that pretending to be a tai chi master or a sought-after wiz at math wins him friends for a while -- until it comically backfires. A biracial girl is amused when her dad clears seats for his family on a crowded subway in under a minute, simply by sitting quietly between two uptight women. Edited by acclaimed author and speaker Mitali Perkins, this collection of fiction and nonfiction uses a mix of styles as diverse as their authors, from laugh-out-loud funny to wry, ironic, or poignant, in prose, poetry, and comic form.
2 Votes

Life can be difficult, especially if you are from a different culture than all your peers. And for these ten authors, sharing their experience or a story they heard from others is very serious, other than the fact that they are comedic writers and are sharing the hilarious stories of going all-Asian to fit in and sitting in the waiting room with your Creo grandmother for four hours. Be prepared to laugh as these authors step up to the mic and share some truths about cultures.

What's this?
Open Mic: Riffs on Life Between Cultures in Ten Voices review by VBat

Open Mic: Riffs on Life Between Cultures in Ten Voices is an anthology centered around, as the title suggests, life between cultures. The collection includes everything from a young Asian-American trying to be "uber-asian" in order to fit in, to a geeky black student struggling against the negative image of affirmative action. The stories are written in prose and poetry, and the book even includes a comic. Throughout the ten stories, the various authors present a picture of modern race relations, stereotypes, and the art of fitting in.