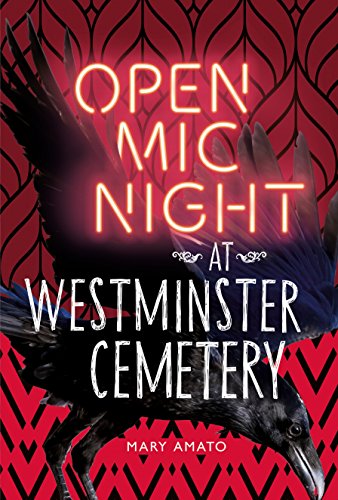 Open Mic Night at Westminster Cemetery
Mary Amato
When Lacy wakes up dead in Westminster Cemetery, final resting place of Edgar Allan Poe, she's confused. It's the job of Sam, a young soldier who died in 1865, to teach her the rules of the afterlife and to warn her about Suppression—a punishment worse than death.Lacy desperately wants to leave the cemetery and find out how she died, but every soul is obligated to perform a job. Given the task of providing entertainment, Lacy proposes an open mic, which becomes a chance for the cemetery's residents to express themselves. But Lacy is in for another shock when surprising and long-buried truths begin to emerge.
1 Vote

Written as a two act stage play, we follow the story of the souls of those who are buried at Westminster Cemetery. Westminster Cemetery is famous for being the final resting place for Edgar Allen Poe. We meet the main character Lacy Brink. She is classified as a modern when she wakes up dead and the other souls who awaken all died before 1913. She learns of the strict routine and rules that the dead follow. If they don't follow the rules, and there are a lot of them, they receive strikes.