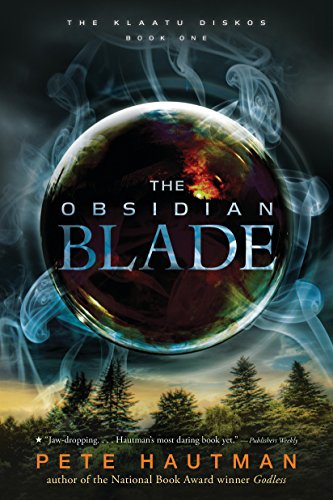 Kicking off a riveting sci-fi trilogy, National Book Award winner Pete Hautman plunges us into a world where time is a tool — and the question is, who will control it?The first time his father disappeared, Tucker Feye had just turned thirteen. The Reverend Feye simply climbed on the roof to fix a shingle, let out a scream, and vanished — only to walk up the driveway an hour later, looking older and worn, with a strange girl named Lahlia in tow. In the months that followed, Tucker watched his father grow distant and his once loving mother slide into madness. But then both of his parents disappear. Now in the care of his wild Uncle Kosh, Tucker begins to suspect that the disks of shimmering air he keeps seeing — one right on top of the roof — hold the answer to restoring his family. And when he dares to step into one, he’s launched on a time-twisting journey— from a small Midwestern town to a futuristic hospital run by digitally augmented healers, from the death of an ancient prophet to a forest at the end of time. Inevitably, Tucker’s actions alter the past and future, changing his world forever.
2 Votes

Tucker’s life was pretty average.  His father was a preacher that owned a church and his mother played the organ at the church. He had no other family except an uncle that he didn’t know that well. His best friends expect a normal summer of just hanging out. That is until one day, when fixing the roof, his dad falls through a portal and returns with a strange girl. Tuck then is pushed onto a time traveling adventure that sends him to the future and back.

What's this?
The Obsidian Blade review by avance

This story takes place in a world very similar to our own. except in this world, there exists a strange presence. The Klaatu Diskos, portals to another world, scatter time and space. If one were to come across one by chance, they would be transported to a famous event in history. Some of those events are dangerous. They could be the 9-11 terrorist attack, or the explosion of a volcano. Soon after Tucker’s father goes up on a roof and disappears, only to come back hours later with a strange girl, his mother falls gravely ill.