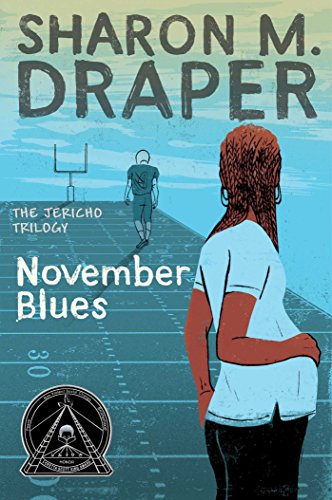 November Blues
Sharon M. Draper
In this second novel in Sharon M. Draper’s Jericho Trilogy and Coretta Scott King Honor Book, Jericho and November are locked together in pain from the past and fear for the future, and it feels as though there’s no way to escape either.When November Nelson loses her boyfriend, Josh, to a pledge stunt gone horribly wrong, she thinks her life can’t possibly get any worse. But Josh left something behind that will change November’s life forever. She’s pregnant and now she’s faced with the biggest decision of her life. How in the world will she tell her mom? And how will Josh’s parents take the news? She’s never needed a friend more. Jericho Prescott lost his best friend when he lost his cousin, Josh, and the pain is almost more than he can bear. His world becomes divided into “before” and “after” Josh’s death. He finds the only way he can escape the emptiness he feels is to quit doing the things that made him happy when his cousin was alive, such as playing his beloved trumpet. At the same time, he begins playing football, where he hopes the physical pain will suppress the emotional agony. But will hiding behind shoulder pads really help? And will his gridiron obsession prevent him from being there for his cousin’s girlfriend when she needs him most?
2 Votes

November Nelson is your ideal student of the 11th grade. She has a nice, popular boyfriend, Josh, she does really well in school, her mom thinks she is perfect, and she has tons of friends. But she feels as if her life is going through the tubes after Josh dies from a mishap gone wrong. That's not it, she found out something else about herself that will change her life drastically forever. Now she has to make the biggest decision she'll ever face. She only wishes Josh was here to help her get through things... Jericho Prescott is the cousin of Josh.

When teen November Nelson finds out she is pregnant with her dead boyfriend's baby, everything she knows changes. Her mother is disappointed, her college dream crushed,her schoolmates judging her. In the struggle she discovers what it's like to have real friends, supporters through hardships. And what is like to be sad and scared. In this story of ups and downs, Sharon Draper shows how things can change in a blink of an eye.