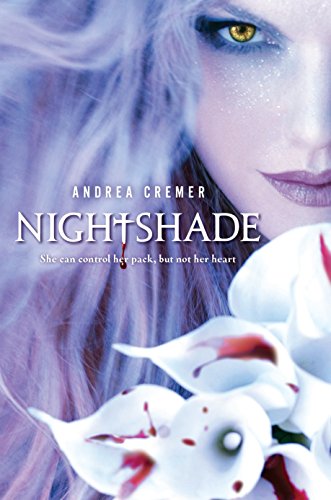 A Q&A with Andrea Cremer Q: Where did you get the idea for Nightshade? A: Nightshade is Calla's story and she was the inspiration for the book. I tend to write from characters and Calla was floating around in my head for a week or two before I started putting her story onto the page. I knew she was a girl who was also a wolf. I knew she was strong, but also in serious trouble. I couldn't figure out how someone so powerful could be in that sort of a fix. That's where Nightshade's world emerged it was all about building a history and society that explained Calla's predicament. Q: Nightshade takes place in such a vivid, well-developed fantasy world. What sort of research went into the development of the world and the mythology of the series? A: Like I said earlier, Calla started it all. The world of Nightshade came as I tried to figure out how someone like Calla, a girl who I knew was incredibly powerful, could be afraid and angry. What was controlling her? Why would she be fighting against her own destiny? I realized that she was facing off with something even more powerful than herself. That’s where my background as a historian came in. I teach early modern history (1500-1800)--a period of immense, violent change in human societies. This is the time of witch hunts, religious warfare, colonization, the Inquistion; all types of cataclysmic social transformation that turned the lives across the globe upside down. The more I thought about Calla I thought about the ways in which wolf warriors and witches could have intertwined lives. The mythology in Nightshade is a blend of history and lore plus new twists I imagined along the way. Q: Your narrator, Calla Tor, is a very take-charge female character—in fact, she’s the alpha of her wolf pack. What are the unique benefits and challenges of her position? Are you hoping that teenage girls will see Calla as a role model? A: Calla is a natural leader and fierce warrior. She loves taking charge and she’s intensely loyal to her packmates, but her role as alpha comes with restrictions set by her masters. Calla’s sense of duty comes into conflict with her independent spirit--she wants to make her own choices rather than just follow orders. I hope that girls, and boys, will see the way Calla’s journey is about finding her true self, questioning a society that limits her strengths, and fighting for what she loves even when that goes against the rules of her world. Q: Why did you decide to set Nightshade in Colorado? What does the setting bring to the story? A: Calla’s masters, the Keepers, are powerful witches who live in luxury, but also seclusion. I wanted a setting that evoked that type of exclusive, almost unreachable landscape where a world of privilege is bordered by the wildness of forests and mountains. Vail, Colorado offered the best mixture of those qualities. Q: What do you like best about writing for teens? A: I love writing YA because it’s full of characters who are testing the limits of their world and figuring out who they really are. Coming of age and self-discovery are incredible moments that reveal so much about human nature and offers the chance to explore pivotal questions and ideas we all struggle with. I also think YA fiction is fearless about expanding the realm of the possible. It’s a boundless, thrilling place to be a writer. Q: Will there be more books featuring Calla, or set in the Nightshade world? A: Yes! Nightshade is a trilogy. Wolfsbane (Nightshade #2) will be published in July 2011 and Bloodrose (Nightshade #3) in spring 2012. After that I’m writing a prequel about the origins of the Witches War, which will be on bookstore shelves in fall 2012. Beyond that--who knows! I’m always coming up with new ideas, so this is just the beginning. Q: What is one thing you would like people to take away from their experience of reading Nightshade? A: I hope that readers will be as invested in the struggles, hopes, and fears of Calla and her pack as I am. The most important thing to me is that the world of Nightshade and the lives of its characters draw readers in so that we’re all going through the series together--cheering, laughing, crying, fighting--that it becomes more than a good story, that we feel like we’re traveling with Calla and her pack on their journey to unravel the tangled mystery of Nightshade’s world.
2 Votes

Calla Tor is supposed to become the female alpha to a new pack after she and Ren mate, but Calla's life is not that easy. When Shay Doran comes to live in Vail, things go wrong. When Calla offers Shay her healing blood, and saves his life, she becomes more attached to him than she is supposed to. With the mating day less than a month away, the werewolves will have to either ban together or break apart forever.

What's this?
Nightshade review by MDG

Calla Tor is a Guardian, and can shapeshift seamlessly from human to wolf whenever she wants, which is helpful when her and her pack must protect the sacred sites for their masters, the Keepers. As the alpha female, Calla must lead her pack and marry alpha male Ren of a rival pack. But when she illicitly saves a human boy, Shay, she feels an undeniable attraction to him. When Shay causes Calla to question the Keepers' rules, her impending marriage, and her whole lifestyle, Calla must make the choice to remain dutiful to her pack or follow her heart.