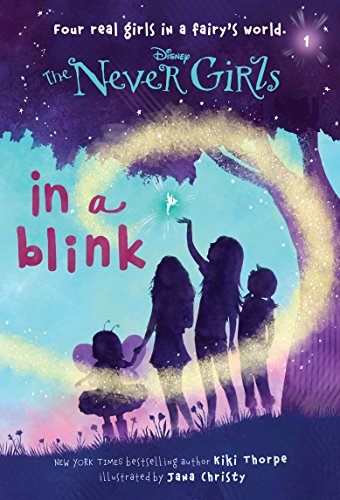 Never Girls #1: In a Blink (Disney Fairies)
Jana Christy, Kiki Thorpe
A New York Times BestsellerThe Disney Fairies star in a magical all-new early chapter book series for kids ages 6 to 10—The Never Girls!Kate craves adventure and excitement.Mia loves dresses, roses, and anything beautiful.Lainey dreams of talking to animals.Gabby believes in fairies more than anyone.In a blink of an eye, these four best friends all get their biggest wish—they’re whisked off to Never Land, home to Tinker Bell and her fairy friends. The adventure of a lifetime is just beginning! But how will the Never Girls ever get home again?
1 Vote

When four girls, Kait ,Lainey, Mai and Gabby, get swept into Never Land extraordinary things begin to happen. The girls get to fly, visit, and live with fairies. While they are in Never Land, Kait chooses not to follow the rules and talks to Vidia. Vidia a rebellious fairy,  tells Kait to take the Pixie dust because it belongs to everyone. In reality the Pixie Dust, which the fairies use to fly, does belong to everyone but they are only allowed to use a cupful a day so it will last. Kait steals a whole sock full of Pixie Dust.