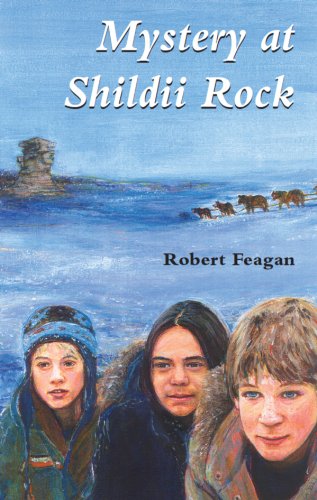 Mystery at Shildii Rock
Robert Feagan
To the Gwich'in First Nation, Shildii Rock near Fort McPherson in the Northwest Territories is a place of deep mythological significance.When 12-year-old Robin Harris, the son of a Royal Canadian Mounted Police officer, spots someone on the rock staring at him, he just knows something is wrong. Robin and his friend Wayne Reindeer, a Gwich’in youth, set out to discover what's going on and to gain the respect of their fathers. But Robin is notorious for his overactive imagination and has a hard time getting anyone to believe him. To make matters worse, there's a crazy Dutch trapper with an ugly disposition and murder in his eyes. And whenever possible a new boy in town throws wrenches into Robin's plans. When murder comes their way, Robin and Wayne realize it’s too late to turn back. Will the boys unlock the secrets of Shildii Rock in time? Or will they, too, fall victim to a killer?
1 Vote

When Robin Harris, a twelve year old boy, claims to have seen someone on the top of Shildii Rock, no one believes him. Not even his father will listen to him. Robin is determined to prove that someone is up there. He convinces his friends to help him discover who it is and what they want. This person is not friendly though. The person threatens their lives. The friends run into bigger problems then they had expected. Once they reach the top there is no turning back. Will the children live to prove that someone is up there or will the unknown stranger kill them first?