The Mysterious Edge of the Heroic World 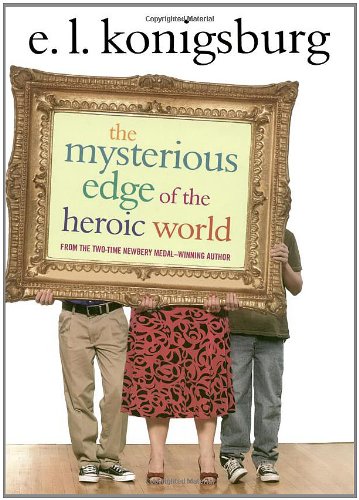 The Mysterious Edge of the Heroic World
E.L. Konigsburg
"ninety percent of who you are is invisible." Amedeo Kaplan seems just like any other new kid who has moved into the town of St. Malo, Florida, a navy town where new faces are the norm. But Amedeo has a secret, a dream: More than anything in the world, he wants to discover something -- a place, a process, even a fossil -- some treasure that no one realizes is there until he finds it. And he would also like to discover a true friend to share these things with. William Wilcox seems like an unlikely candidate for friendship: an aloof boy who is all edges and who owns silence the way other people own words. When Amedeo and William find themselves working together on a house sale for Amedeo's eccentric neighbor, Mrs. Zender, Amedeo has an inkling that both his wishes may come true. For Mrs. Zender's mansion is crammed with memorabilia of her long life, and there is a story to go with every piece. Soon the boys find themselves caught up in one particular story -- a story that links a sketch, a young boy's life, an old man's reminiscence, and a painful secret dating back to the outrages of Nazi Germany. It's a story that will take them to the edge of what they know about heroism and the mystery of the human heart. Two-time Newbery winner E. L. Konigsburg spins a magnificent tale of art, discovery, friendship, history, and truth.
1 Vote

Tweet
The Mysterious Edge of the Heroic World review by PFlo

The Mysterious Edge of the Heroic World by E.L. Konigsburg is about Amedeo Kaplan. He had moved from New York City to Malo, Florida with his mother. His parents are divorced and his father is an artist, so Amedeo knows a great deal about art and its history. Amedeo meets William Wilcox and his mother, who are the liquidators for Amedeo's neighbor, Mrs. Zender. Mrs. Zender is a colorful character. She is the last heir of the Tull family. The Tulls owned hundreds of acres of timberland in northern Florida and southern Georgia. Mrs.