The Mysterious Adventures of Pauline Bovary 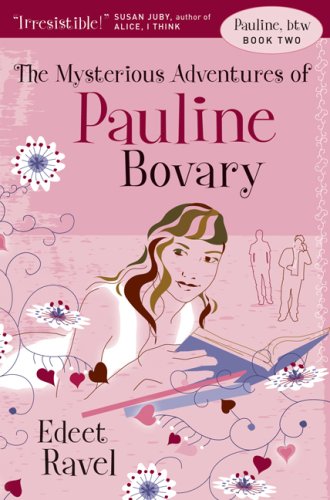 The Mysterious Adventures of Pauline Bovary
Edeet Ravel
With life simply overflowing with pungent melodrama, it’s all Pauline and her purple pen can do to record each twist of the plot. First, her best friend splits to become a teen ice queen. Then, Pauline’s dragged into the revolting details of her divorcing parents’ love life. And to top it off, she finds herself falling for a self-described neo-existentialist”  much to the displeasure of her loyal boyfriend. How will she ever write her way out of this one?
1 Vote

Tweet
The Mysterious Adventures of Pauline Bovary review by GSch

This book is the second in the series, Pauline, btw. It is written in a new type of format, as Pauline is recording her story as a novel, and attempts to get it published, as in the first book in the series. In this episode, Pauline struggles with many adolescent problems: her best friend is moving to Toronto, her parents recently divorced, and she is starting the 8th grade. She meets a new boy at school, and starts seeing him, although she already has a boyfriend.