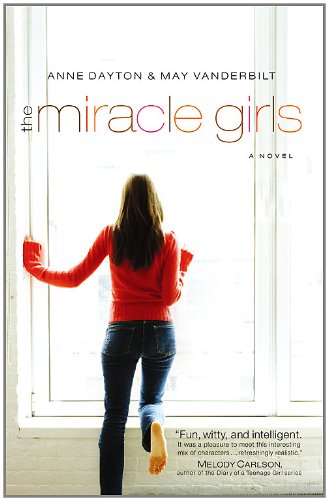 The Miracle Girls
May Vanderbilt, Anne Dayton
Ana Dominguez was happy in San Jose, but everything changed when her dad moved the family to Half Moon Bay, California, to open a law practice. Her parents think she's settling into her new school nicely, but she has them fooled. Riley, the most popular girl in school, has picked Ana as enemy #1, and Tyler, Ana's crush, doesn't even know Ana exists. When Ana ends up in detention with Riley, her life suddenly changes. When Ana, Riley, Christine, and Zoe share their essays on "The Day My Life Changed," it turns out they have more in common than they ever would have imagined. Now as Ana lives out her faith, she and Zoe are determined to befriend Riley and Christine. But the drama of high school life has only just begun. . . .
1 Vote

The Miracle Girls by Anne Dayton and May Vanderbilt tells the story of 14 year-old Ana Dominguez. Ana has just moved from San Jose, California to the nearby small town Half Moon Bay. A few weeks after she starts her freshman year of high school in this new town, Ana lands herself and another girl, Riley McGee, in detention after accusing Riley of cheating on a pop quiz. While there, the teens in detention are required to write an essay entitled The Day My Life Changed and are then divided into groups of four to whom they must read their essays.