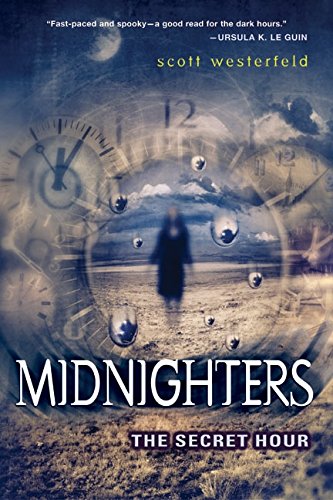 Midnighters: The Secret Hour
Scott Westerfeld
This is the first book in New York Times bestselling author Scott Westerfeld’s Midnighters series.A few nights after Jessica Day arrives in Bixby, Oklahoma, she wakes up at midnight to find the entire world frozen. For one secret hour each night, the town belongs to the dark creatures that haunt the shadows. And only a small group of people—Jessica included—is free to move about then. They are The Midnighters.  The Secret Hour is the first book in the Midnighters trilogy, from the acclaimed New York Times bestselling author of the Uglies series.
2 Votes

Only four people know of a peculiar thing that occurs in the small town of Bixby, Oklahoma, time stops at midnight for one hour, and they are the only humans they know of that exist during it. This all changes when "Midnighters", who gain special powers during the hour, realize that she too can exist during the time. However, there are dark creatures that have been named darklings and slithers by the Midnighters. These creatures have left the small group alone thus far, but they take a special interest in Jessica and seem to want to kill her.

What's this?
Midnighters: The Secret Hour review by JMc

In a town with a secret hour, time freezes for everyone during midnight. Four children are granted the ability to move in the secret hour. When a new girl comes to town, she stirs up unusual activity from the creatures that also live in the secret hour. To the other midnighters, Jessica Day is a misfit with nothing special about her. Other than her strange eyes, that is. A mysterious novel that leaves you wondering, Midnighters: The Secret Hour will make your heart skip a beat.