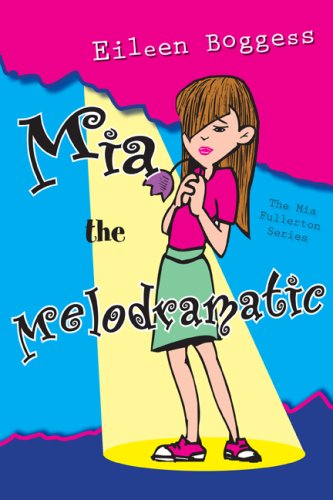 Mia the Melodramatic
Eileen Boggess
Summer has finally arrived, but Mia Fullerton does not have much to celebrate. Her best friend, Lisa, is spending the summer at a Mensa camp, and her boyfriend, Tim, will be at his grandparents house in Maine. So, stuck with a choice of spending the next two months hanging out with her younger brother, Chris who has declared a prank war on her or taking a job on the stage crew at a local children s theater group, Mia chooses the lesser of two evils and begins working at Little Tyke. The moment she meets the other student members of the stage crew, Mia realizes she is not at St. Hilary s anymore. There is Zoë, a Goth punk rock singer with fifteen facial piercings; Henry, a caffeine addict with the self-declared ability to predict people s coffee preferences; and Eric, a former childhood friend who has definitely outgrown his shy ways and geeky appearance. In this sequel to the much-loved Mia the Meek, readers will again enjoy spending time with Mia Fullerton, watching as she navigates the next stage of adolescence, one humorous and memorable fiasco at a time.
1 Vote

In this second Mia Fullerton book written by Eileen Boggess, Mia is just starting off her summer vacation when her mother comes into her bedroom and tells her that she now has a job working at the Little Tyke's Theater of the Arts. Her whole summer and her plans are totally ruined by this and the fact that both her best friend and her boyfriend are going away for the entire summer. She starts her job soon after and realizes how crazy this summer is really going to be.