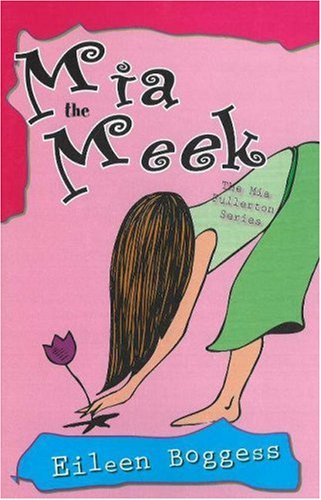 Mia the Meek
Eileen Boggess
After one summer at the Little Tykes Theatre, Mia Fullerton is meek no more, but that doesn't make her life any easier―not in her sophomore year at St. Hilary’s, when her best friend Lisa forces her into a dangerously big part in The Music Man. Not when her ex-boyfriend, Tim, is teaching his little brother Chris to treat women like objects.And not when she learns to drive―with serious repercussions.Who is Mia? Is she an independent girl like Zoë, her acerbic goth friend from Little Tykes? Or is she the girl who misses Tim, even after the way he betrayed her? Can Mia forgive Tim? Should she instead choose Eric, Zoë’s cousin, a nicer and more respectful choice in every way? Or would either choice defeat her goals of independence?Between dog costumes and stage costumes, big embarrassments and bigger chickens, and everything else that could possibly go wrong, Mia the Magnificent is a hilarious, clever, and endlessly fun novel, and the best installment yet of the Mia Fullerton series.
1 Vote

Fourteen-going-on-fifteen-year-old Mia Fullerton is a very shy person who has the nickname, "Mia the Meek." She will soon start her freshman year of school at St. Hilary's with a goal of getting rid of her nickname and being known throughout her school. There are a few problems getting that accomplished though, such as her mom being her English teacher, her annoying little brother, and new neighbors with a son her age named Tim.