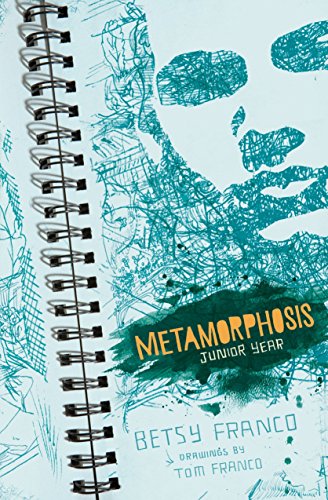 Metamorphosis
Tom Franco, Betsy Franco
He’s a young artist obsessed with myths. But can he fix his own fate? Acclaimed author Betsy Franco and her talented son collaborate on a hip YA novel of "epic" proportions. (Age 14 and up)Life. Love. Death. Identity. Ovid’s got a lot on his mind, and he pours it all — as confessions, observations, narrative poems, and drawings — into the pages of a notebook. Inspired by his namesake, he wryly records his classmates’ dramas as modern-day Roman mythology. There’s Sophie and Caleb, the Psyche and Cupid of cyber-couples; poetic Paula, who pursues filmmaker Franny like Apollo chasing Daphne; and graphic novelist Duwayne, a Proserpina shuttling between divorced parents. Meanwhile, Ovid hides his own Olympian struggles: his meth addict sister Thena has run off, leaving him with a suffocating home life and a disturbing secret. In her striking YA debut, Betsy Franco introduces an expressive soul with a heartbreakingly authentic voice. Fantastical ink illustrations by her son Tom Franco enhance the intimate tone, delving deep into one intriguing teen’s imagination.
1 Vote

This book follows a boy named Ovid through his junior year. All of Ovids classmates have changed over the summer. Ovid draws pictures and writes poems about his classmates. He is really good at art. He keeps his journal in between his mattress. He hopes that people care about what he draws. Read this book and find out how Ovids classmates progress through their junior year.