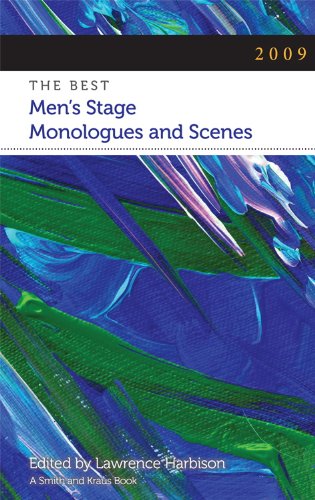 Men's Stage Monologues and Scenes
Lawrence Harbison (Editor), Lawrence Harbison (Editor)
This year Smith and Kraus has decided to combine its annual best monologues and best scenes anthologies. The scenes included in this book are either for two men or for one man and one woman. The latter are scenes in which the male role is predominant.Here you will find a rich and varied selection of monologues and scenes from plays that were produced and/or published in the 2008-2009 theatrical season. Most are for younger performers (teens through thirties), but there are also some excellent pieces for men in their forties and fifties, and even a few for older performers. Some are comic (laughs), some are dramatic (generally, no laughs). Some are rather short, some are rather long. All represent the best in contemporary playwriting.Several of the monologues are by playwrights whose work may be familiar to you, such as Don Nigro, A. R. Gurney, Sam Bobrick, Terrence McNally, Adam Rapp, Steven Dietz, Itamar Moses, Stephen Belber, Keith Reddin, Naomi Iizuka, Michael Weller, Roberto Aguirre-Sacasa, Richard Vetere, Bruce Graham, Jacquelyn Reingold, Sam Shepard, and Nicky Silver; others are by exciting up-and-comers like Octavio Solis, Lydia Stryk, Michael Vukadinovich, Liz Flahive, John Kolvenbach, Sylvia Reed, Barton Bishop, Padraic Lillis, Michael Golamco, and Lucy Thurber.The scenes are by master playwrights, such as Itamar Moses, Noah Haidle, Aguirre-Sacasa, and Silver, and by exciting new writers, such as Saviana Stanescu, E. M. Lewis, Jonathan Rand, Kolvenbach, Golamco, Larry Kunofsky, and Susan Bernfield.
1 Vote

This book contains the best stage monologues and scenes for men from stage productions in 2009. Since there are many different pieces in this book, it is not possible to give a plot summary. But the book is filled with many dramatic pieces that deal with issues ranging from having a parent walkout on their son to teen pregnancy. There are also comical pieces that are sure to make people laugh when reading. Also, there are pieces that are dramatic AND funny. The scenes have only two actors, both of which can be read as male parts, or male and female.