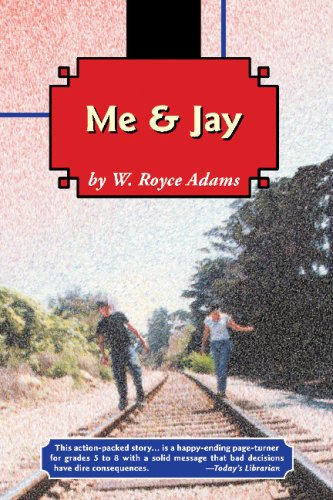 Me and Jay
W. Royce Adams
One hot summer day, thirteen-year-olds Geri Thomas and Jay Thornton try to find a place to cool off so they seek Blue Pool, a dangerous, off-limits area. The two discover adventures they never bargained for as they foolishly hop a slow freight train to take them up the river road and accidentally start a grass fire. Soon they find themselves being chased through a mammoth cave by two desperate men willing to do almost anything to keep the teens from telling what they've discovered. Geri and Jay's adventures bring them one step closer to maturity and acceptance of responsibility while delivering a solid message that bad decisions can have frightful consequences.
1 Vote

It all started with the dare. It all ended in a devastating result. Randy, a twelve-year, Geri, a thirteen-year old girl, and Jay, a boy the same age as Geri, were as bored and hot as can be one summer day. Geri states a dare: "Let's find Blue Pool!" Jay thinks of her as crazy, but she says she's dead serious. Randy doesn't want to go; he doesn't want to get in trouble. So, Jay and Geri set off. After a mile or so of walking on train tracks, they get tired of walking. And then, the unthinkable happens; a train comes. They get of the tracks.