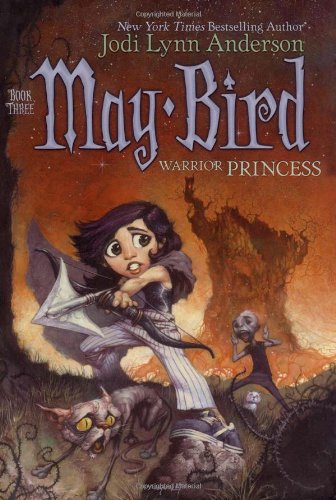 May Bird, Warrior Princess: Book Three
Jodi Lynn Anderson
At Hog Wallow Middle School, May Ellen Bird was always slightly invisible. Then she went on a long trip to the land of the dead, where ghost towns glowed blue in the dark dusk and spooky specters dwelled in cities on the Dead Sea. Back on Earth at last, May and her hairless cat, Somber Kitty, are now famous, their faces plastered across souvenirs and sportswear that read "May Bird Went to the Land of the Dead and All She Brought Me Was This Lousy T-Shirt." But, finally in the spotlight, May feels more than ever that she doesn't belong. Every night she sits by her bedroom window, gazing at the sky and dreaming of another place, wishing -- despite herself -- to be back among the ghosts. And then one night she gets her heart's desire in a way she would never have wished for. Only the Ever After isn't anything like the world May left behind three years ago. The spirits have vanished, and the towns -- once full of every manner of things that go bump in the night -- are deserted. Evil Bo Cleevil has made the Ever After as cold as his own frigid soul, and put up a bunch of tacky malls to boot. Now, with her friends missing and enemies all around her, May must find her way to the edge of the universe, where night swallows the stars, where allies are few and often have bad breath, where endings can also be beginnings, and where the truest hero lurks in the unlikeliest of souls. But Bo Cleevil's got one last trick up his sleeve -- one that no one on Earth is ready for. With the worlds of the living and the dead in the balance, will May's courage fail her one last time? Or will she finally become the warrior she was always meant to be?
1 Vote

May Bird has been living on Earth for three years since coming back from the Ever After. No one, not even her loving mother, believes her wild stories about her ghostly friends. When she goes on her house's Widow's Walk, May and Somber Kitty fall to their deaths. They appear right away, in the Spectroplex in the Ever After. May decides to go back to where her friends Arista and Pumpkin would be, no one is there. In fact, no one is anywhere to be seen. Finally, after roaming around to different cities, May finally meets up with Pumpkin.