Man in the Moon 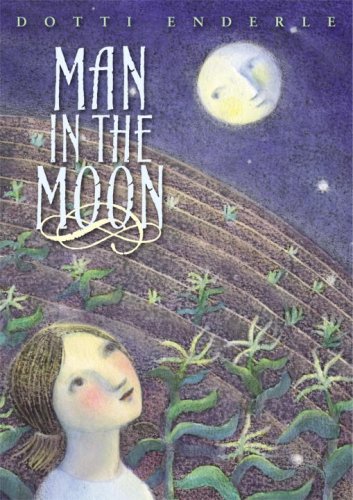 Man in the Moon
Dotti Enderle
JANINE IS PREPARED for a sticky, boring summer on her family’s land in the middle of nowhere. Far from town and with only her ailing brother Ricky for company, Janine spends half her time stuck inside with him, wishing that their mother would let them out to play. But when Mr. Lunas—a mysterious man who saved Janine’s father’s life in the war— arrives through the cornfields, strange things begin happening. Ricky sets his heart on building a go-cart. Mr. Lunas eats them out of house and home, then suddenly stops eating at all. And then Ricky’s health takes a turn for the worse, and it looks like Janine’s world is about to spin out of control. Janine’s overprotective mom locks Ricky in his bedroom with her, and Janine is desperate to find a way to say goodbye. In the end, it’s Mr. Lunas who comes to her rescue, encouraging her to break Ricky free—and then giving them both an enormous gift. Thought-provoking and gracefully written, this short literary novel is a small gem.
1 Vote

"Man in the Moon" by Dotti Enderle is a children's chapter book. As its appropriate title suggests, the plot is focused around a peculiar man in a moon. Technically, the part about the moon is just a metaphor, but, towards the end of the book, the reader may take this statement to be more than just literary. The story follows a girl growing up in the sixties with a sickly younger brother. The boy yearns to play outside but is confined to his indoor setting. One day, a very unique man comes to visit.