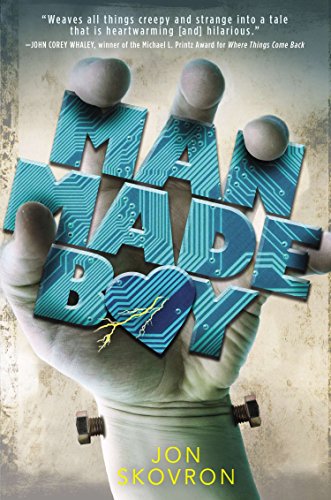 Man Made Boy
Jon Skovron
Love can be a real monster.Sixteen-year-old Boy’s never left home.  When you’re the son of Frankenstein’s monster and the Bride, it’s tough to go out in public, unless you want to draw the attention of a torch-wielding mob.  And since Boy and his family live in a secret enclave of monsters hidden under Times Square, it’s important they maintain a low profile.Boy’s only interactions with the world are through the Internet, where he’s a hacker extraordinaire who can hide his hulking body and stitched-together face behind a layer of code.  When conflict erupts at home, Boy runs away and embarks on a cross-country road trip with the granddaughters of Jekyll and Hyde, who introduce him to malls and diners, love and heartbreak. But no matter how far Boy runs, he can’t escape his demons—both literal and figurative—until he faces his family once more.This hilarious, romantic, and wildly imaginative tale redefines what it means to be a monster—and a man.
1 Vote

Being the son of Frankenstein's Monster and the Bride, Boy can't go out in public. That is, unless he wants to face the wrath of a torch-wielding mob. They all live in an enclave of monsters under Times Square, the humans blissfully unaware of their existence. Boy, however, has only interacted with the outside world through the Internet - not only that, he's a well-known hacking genius. But after one of his viruses go awry, Boy runs away from home and ends up meeting the granddaughters of Jekyll and Hyde, who introduce him to all the human world has to offer.