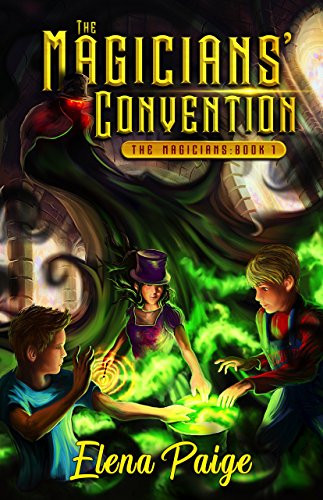 The Magicians' Convention - Book 1 in The Magicians Series
Elena Paige
Abracadabra! Plenty of children have waved sticks in the air and shouted this word, claiming they can perform magic.However, for twelve-year-old orphan Toby, the playful word takes on a whole new meaning when he wakes up to find his grandfather has been kidnapped by a talking panther.Following the clues left behind Toby finds himself at the 999th Magicians' Convention. Filled with mages, illusionists, and foes at every turn, Toby and his newfound friends, Thatch and Wesa, must find an ancient magical hat before an evil magician gets his hands on it first.Failing will mean the deaths of those they love and create a dangerous divide in the world of magic.The Magicians' Convention is the spellbinding first book in a trilogy of middle-grade fantasy novels. If you like action-packed adventures, imaginative worlds, and magical spells, then you'll love Elena Paige's mystical tale.Buy The Magicians' Convention to dive into a fantastical new series today!**** Purchase the Paperback and get the Ebook FREE***
2 Votes

Twelve-year-old Toby Roberts, the main character in The Magicians Convention by Elena Paige, is sure that magic isn’t real. But one morning while looking out his bedroom window, Toby sees hundreds of people clad in black cloaks and top hats streaming into his neighbor’s tiny house. Stranger yet, his grandpa swears he doesn’t see anyone at all.

What's this?
The Magicians' Convention - Book 1 in The Magicians Series review by walkerjm108

The story takes place in a large, magically created circle with doors surrounding the outside that only magicians and illusionists can enter. One half the circle is decorated in the color gold for the illusionists, the second half in purple for the magicians. The ceiling is lit with floating candles, the floor is filled with tables and performing stages were those with magic or skills in illusion can perform and sell their wares.