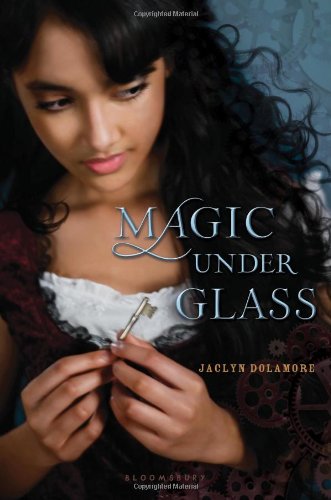 Magic Under Glass
Jaclyn Dolamore
Nimira is a foreign music-hall girl forced to dance for pennies. When wealthy sorcerer Hollin Parry hires her to sing with a piano-playing automaton, Nimira believes it is the start of a new and better life. In Parry's world, however, buried secrets are beginning to stir. Unsettling below-stairs rumors swirl about ghosts, a madwoman roaming the halls, and Parry's involvement with a league of sorcerers who torture fairies for sport. Then Nimira discovers the spirit of a fairy gentleman named Erris is trapped inside the clockwork automaton, waiting for someone to break his curse. The two fall into a love that seems hopeless, and breaking the curse becomes a race against time, as not just their love, but the fate of the entire magical world may be in peril.
1 Vote

In the magical world of Lorinar, Nimira is an exotic and dark-skinned trouser-girl who sings and dances in music halls for money. She's away from her homeland of Tiansher and is extremely poor, so when wealthy Hollin Parry offers her a job singing with an automaton, she readily accepts. But rumors that the automaton is haunted cause Nimira to closely examine it and she discovers that a fairy is trapped in the mechanical body!