Magic Can Be Murder 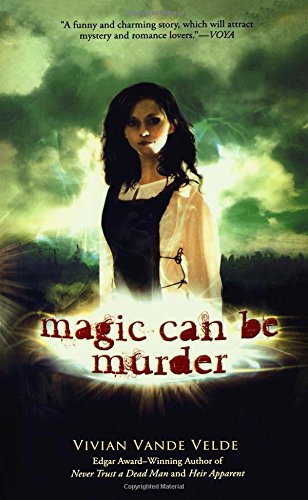 Magic Can Be Murder
Vivian Vande Velde
Nola's not much of a witch--she can work only a few useless spells, like the one that lets her spy on people. But there's no spell for keeping her crazy mother--who hears voices and is a magnet for witch-hunters--out of trouble. The two flee from town to town until the day Nola magically witnesses a murder. Which is bad enough, but worse is that the murderer may frame Nola and her mother for the crime. And then no amount of magic will save her. And you think your teenage years are tough. . . .
1 Vote

Two witches, Nola and her mother, are living a tough life. They are constantly on the run, fleeing from towns people who suspect their secret. When Nola casts a spell, and leaves it unattended, everything goes wrong. She finds herself wrapped up in murder story. Will she be able to reveal the murderer, or will she be accused, herself, by the man she's falling for?