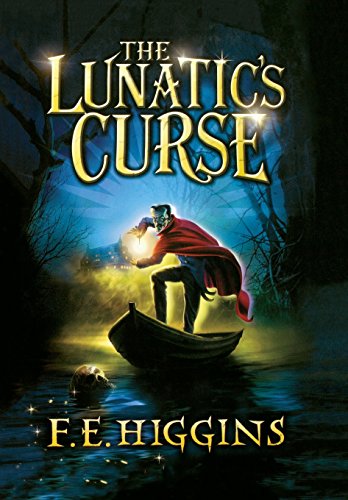 The Lunatic's Curse
F. E. Higgins
The town of Opum Oppidulum is home to the freezing Lake Beluarum and its rumored monster. On an island at the center of the lake is an asylum; no one has ever escaped it. So how will Rex, whose father, Ambrose Grammaticus, has been imprisoned there under false pretenses, prove that Ambrose is not insane? And if Rex can free his father, will his evil stepmother drive them both to madness? Higgins' fans will devour this deliciously scary tale, a "polyquel" to her previous books, all of which can be read singly or together. But not in the dark . . .
2 Votes

In a town named Oppum Oppidulum, a twelve year old boy by the name of Rex Grammaticus is the son of a famous engineer and inventor. His father is pronounced a lunatic by his evil step mother and taken to a high security asylum in the middle of a freezing lake. This lake is rumored to be the home of a giant sea monster and diamonds are believed to be at the bottom of the lake. Soon after the story gets going, there is a jail-break and the head warden of the asylum is replaced by a mind doctor, who uses hypnotism in crooked ways.

What's this?
The Lunatic's Curse review by CFlo1111

In The Lunatic's Curse, Rex Grammaticus is living in the town of Oppum Oppidulum. In this thrilling page-turner by F. E. Higgins, Rex is living with his father, Ambrose, and his new mother, Acantha. He hasn't been as happy since his father got engaged, but one night things really get bad. His father goes insane and he is sent to the asylum, but under false pretenses. Rex knows that he can get his father out. Now he just has to find the evidence to prove his father sane. He knows it will be a challenge, but he just doesn't know what he's getting into.