The Love Curse of the Rumbaughs 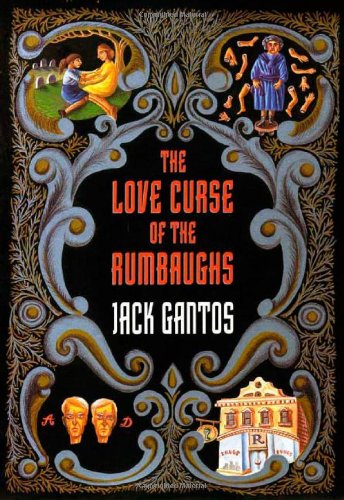 The Love Curse of the Rumbaughs
Jack Gantos
On an unseasonably warm Easter Sunday, a young girl namedIvy discovers a chilling secret in the basement of the Rumbaughpharmacy across the street from the hotel where she lives withher mother. The discovery reveals a disturbing side to theeccentric lives of family friends Abner and Adolph Rumbaugh,known throughout their small western Pennsylvania townsimply as the Twins. It seems that Ab and Dolph have beencompelled by a powerful mutual love for their deceased motherto do something extraordinary, something that in its owntwisted way bridges the gap between the living and the dead.Immediately, Ivy's discovery provokes the revelation of aRumbaugh family curse, a curse that, as Ivy will learn over thecoming years, holds a strange power over herself and her ownmother.In his third book for young adults, Jack Gantos has scripted acompletely original drama. With gothic flavor and black humor,he depicts a group of people bound together by love,compulsion . . . and a passion for taxidermy.
1 Vote

Tweet
The Love Curse of the Rumbaughs review by KHay

Ivy was born with the only kind of love she ever wanted, a mother's love. She doesn't know who her father is and has no desire to find out (though Ivy's mother reveals the truth on her sixteenth birthday). But Ivy's mother does let slip that Ivy has inherited the love curse. The curse entails obsessive love of a mother accompanied by constant worry that she will die. Ivy also develops an unusual hobby: taxidermy. She is aided with this pastime by her quirky neighbors, the Rumbaugh twins, who run the pharmacy across the street.