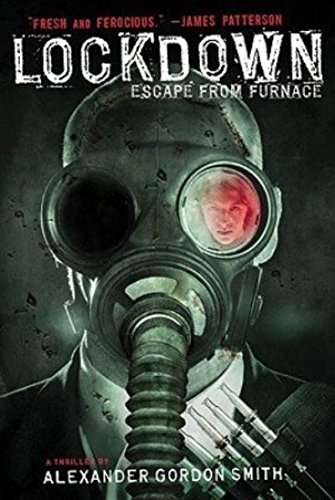 Lockdown: Escape From Furnace
Alexander Gordon Smith
Furnace Penitentiary: the world's most secure prison for young offenders, buried a mile beneath the earth's surface. Convicted of a murder he didn't commit, sentenced to life without parole, "new fish" Alex Sawyer knows he has two choices: find a way out, or resign himself to a death behind bars, in the darkness at the bottom of the world. Except in Furnace, death is the least of his worries. Soon Alex discovers that the prison is a place of pure evil, where inhuman creatures in gas masks stalk the corridors at night, where giants in black suits drag screaming inmates into the shadows, where deformed beasts can be heard howling from the blood-drenched tunnels below. And behind everything is the mysterious, all-powerful warden, a man as cruel and dangerous as the devil himself, whose unthinkable acts have consequences that stretch far beyond the walls of the prison. Together with a bunch of inmates―some innocent kids who have been framed, others cold-blooded killers―Alex plans an escape. But as he starts to uncover the truth about Furnace's deeper, darker purpose, Alex's actions grow ever more dangerous, and he must risk everything to expose this nightmare that's hidden from the eyes of the world.
1 Vote

Alex Sawyer convicted of a murder he didn't commit is now in "Furnace" an underground prison for young felons. He is now a "New Fish" at Furnace and the Skulls are giving him a hard time. Donovan, Alex's room mate and Zee, another friend can't take living in Furnace anymore when they see a bunch of innocent people killed during the Blood Watch. The Blood Watch is when they randomly choose someone to execute. More New Fish, Ashley, Toby, and Gary arrive. Gary is a big guy and after he broke the Skulls leader's wrist, Gary took over.