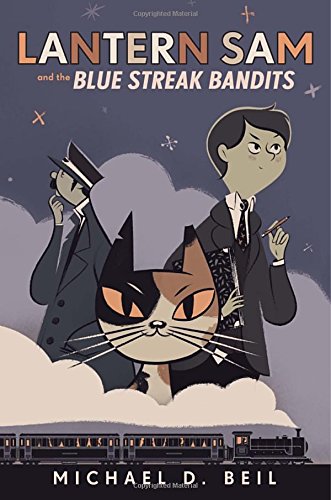 Lantern Sam and the Blue Streak Bandits
Michael D. Beil
“An atmospheric late-1930s adventure with old-time cinematic appeal. Fans of fast-paced, far-fetched action will lap it up as enthusiastically as Sam swallows his favorite brand of sardines.” —Kirkus Reviews   Lantern Sam is the wise-cracking, sarcastic, talking cat (for those who can hear him, that is) who lives on board the Lake Erie Shoreliner train and is one of the best detectives no one knows about. He doesn’t have much patience for humans (unless they bring him sardines), but when 10-year-old traveler Henry can’t find his new friend, the exuberant Ellie, Sam’s enlisted to help. A ransom note is soon discovered and just like that, Sam and Henry are on the case, with the help of Clarence the Conductor (who supplies Sam’s sardines). But is Ellie still on board the train? Did the salesman with his trunk full of samples sneak her off? And why does that couple keep acting so suspiciously? Veteran middle-grade mystery author Michael D. Beil has crafted a hilarious and appealing adventure set in the 1930s that’s chock-full of quirky characters and red herrings, and all with an irresistible cat at its center.
1 Vote

Lantern Sam and The Blue Streak Bandits by Micheal D. Beil is about a boy in the 1930's named Henry who is on a train to visit his father who works with boats. On his way there he meets a girl named Ellie and a talking calico cat named Sam.  Sam can only talk to Henry and the conductor but not Ellie. And nobody knows why he can only talk to these certain people, not even Sam himself.  Everything is rolling smoothly until Ellie gets kidnapped! Can Henry and Sam find her before things really derail?