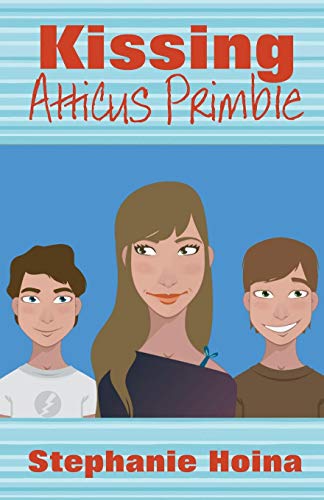 Kissing Atticus Primble
Stephanie Hoina
Like any other girl her age, Kathleen was ready for the excitement of a first love. What she wasn't ready for was Atticus. He had been her best friend for as long as she could remember, and the subtle change in their relationship as they started high school caught her off guard. Turns out, the switch from best friend to boyfriend was so natural, and being with Atticuswas so wonderful, Kathleen didn't even think about the challenges dating someone like Atticus presented. When Bobby O'Hare, the most popular boy in school, sets his sights on Kathleen, she is torn between her love and loyalty to Atticus and the excitement, popularity, and ease of being Bobby's girlfriend. She needs to make a decision. The question is...will it be the right one? About the Author: Stephanie Hoina As a young girl, Stephanie would write about anything and everything simply because it made her happy. She parlayed her love of the written word into a successful marketing and communications career, while a host of never submitted or unfinished picture book and romance novels clogged up her computer's hard drive. Stephanie resides in her hometown of the Bronx, NY, with her son, husband and crazy boxer pup named Bella. She continues to write simply because it makes her happy. Kissing Atticus Primble-which made a daring escape from her computer's hard drive-is her first published novel.
3 Votes

This book is about a girl named Kathleen.  She met Atticus when she was in first grade.  Even though he used a wheelchair, Kathleen didn’t think anything was different about him.  He was a person who wanted a friend, and she was a person who would be a friend with him.  As they get older, they tend to go in separate directions.  But they love each other enough to find time to be together.  After a girl at school gets in a fight with her boyfriend, Bobby (who happens to be the most popular boy at school) and they break up.   Not a big deal.

Kathleen has been in love with Atticus Primble since she was a little girl.  But as they grow older, their relationship escalates into something bigger than either of them could ever anticipate.  But when drop-dead-gorgeous Bobby O'Hare sets his sights on her, Kathleen must decide who she wants to be with.  Will she make the right choice?

When your closest friend is a boy, things can get really awkward really fast! Kissing Atticus Primble tells the story of teenager Kathleen, whose love life is crazier than she ever though it would be. Ever since elementary school, she and Atticus Primble had been best friends. She didn’t care that he was in a wheelchair permanently; she only saw his great personality and firm loyalty. As the pair got older, the inevitable happened: they fell in love.