Keyholders 4: The Wrong Side of Magic 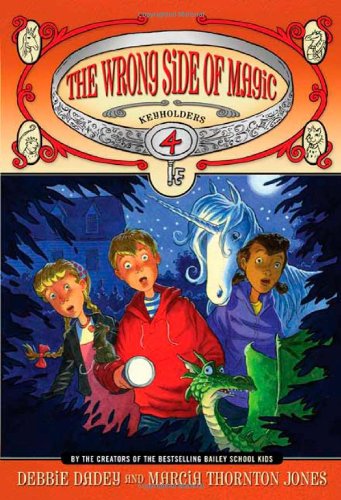 Keyholders 4: The Wrong Side of Magic
Marcia Thornton Jones, Debbie Dadey
The Wrong Side of Magic is the fourth in a series of light fantasy chapter books set in Morgantown, a town on the border between the real world and the magical world, by the authors of the Publishers Weekly best selling BAILEY SCHOOL KIDS―a series of 50 books with more than 30 million copies sold!When Penny, Luke, Natalie and their links return home after rescuing Mr. Leery from the clutches of the evil Queen of the Boggarts, they find a lot of changes in Morgantown. Mrs. Bender, the principal, has decided on longer school days with no recess. The cafeteria ladies are serving up some extremely yucky food (even more than usual). And their teacher, Mr. Crandle, is giving them twice as much homework. What is wrong with all the adults in town? Could it be another scheme from the Boggart Queen? It's up to the apprentice Keyholders to find out.
1 Vote

Tweet
Keyholders 4: The Wrong Side of Magic review by PNels

Keyholders # 4 The Wrong Side of Magic This story is about a magical world on the other side of a border where evil creatures live, including trolls and shape shifters. The main characters are friends, Natalie, Luke and Penny. They are apprentice key holders. A key holder is someone who holds the keys to the border and protects the border from being breached by the evil doers. The story begins when a troll crosses the border and the adventures continue as some of the other evil creatures try to take over the town and the human's bodies.