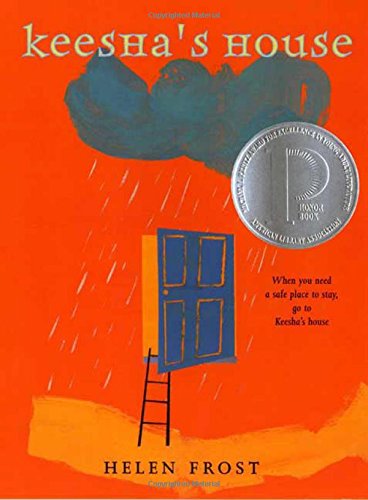 Keesha's House
Helen Frost
An unforgettable narrative collage told in poemsKeesha has found a safe place to live, and other kids gravitate to her house when they just can’t make it on their own. They are Stephie – pregnant, trying to make the right decisions for herself and those she cares about; Jason – Stephie’s boyfriend, torn between his responsibility to Stephie and the baby and the promise of a college basketball career; Dontay – in foster care while his parents are in prison, feeling unwanted both inside and outside the system; Carmen – arrested on a DUI charge, waiting in a juvenile detention center for a judge to hear her case; Harris – disowned by his father after disclosing that he’s gay, living in his car, and taking care of himself; Katie – angry at her mother’s loyalty to an abusive stepfather, losing herself in long hours of work and school. Stretching the boundaries of traditional poetic forms – sestinas and sonnets – Helen Frost’s extraordinary debut novel for young adults weaves together the stories of these seven teenagers as they courageously struggle to hold their lives together and overcome their difficulties. Keesha's House is a 2004 Bank Street - Best Children's Book of the Year.
1 Vote

This book is mainly told in the views of seven teenagers. All six of them want to have a chance to get away from their, abusive fathers, foster parents, upset mothers, worried grandmothers, or just plain get away. So, they go to Keesha's house, a house set back off the street. Stephie is worried about revealing her secret and worried about letting down her boyfriend. Jason is trying to get the reality of what is happening around him and which way he should choose. Dontay is just plain misunderstood.