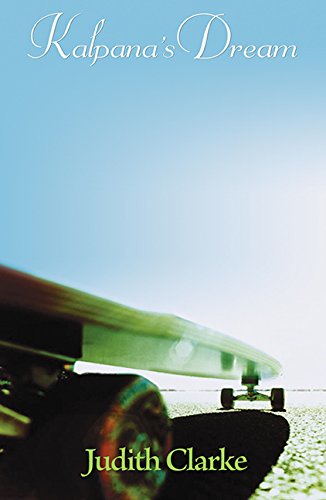 Kalpana's Dream
Judith Clarke
All she thought of was the boy with the skateboard ... Sheep and shepherds, little new lambs ... Why? Neema and her best friend, Kate, are freshmen at Wentworth High. In English class they have the notorious Ms. "Bride of Dracula" Dallimore for a teacher. "Learn to fly!" she urges her students. But what are they supposed to write for their essay, "Who Am I?" At home, Neema's great-grandmother, Kalpana, has come for an extended visit all the way to Australia from India. At night she dreams of flying; during the day she cooks Indian food and watches the same Indian video again and again. It should be great having her there, but Neema doesn't speak Hindi, Kalpana doesn't speak English, and Neema's mother can't always be there to translate. Meanwhile, Gull Oliver, the good-looking new boy at school, seems familiar to Neema. At night he flies past her house on his skateboard. Both Neema and Kalpana watch him, drawn to him for different reasons. This rich story weaves realism and fantasy into an unusual portrayal of coming together and finding the essence of who you are.
1 Vote

Picture in your mind the image on the cover of this book, "Kalpana's Dream": a lone skateboard set dramatically against a periwinkle sky, casting a striking shadow onto the sun- bleached concrete beneath it. Now picture in your mind an elderly Hindu grandma, swathed comfortably in a traditional white sari, stepping confidently onto this skateboard, pushing off, and gracefully gliding into flight.