The Island of Mad Scientists 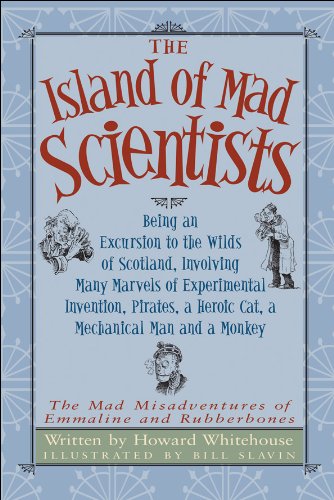 The Island of Mad Scientists
Bill Slavin, Howard Whitehouse
Aviatrix Emmaline Cayley, test pilot Rubberbones and the rest of their wacky household face a new adventure in the wilds of Scotland in this third installment in the Mad Misadventures series. On the run, the friends decide to rendezvous on the Scottish island of Urgghh, a place devoted to scientific experimentation where they believe they will find refuge. Unfortunately, not only are the scientists mad ? the island is anything but safe. A villain known as the Collector, who devotes his time to kidnapping inventors, lives next-door. Journey with our friends to the Island of Mad Scientists, where Emmaline and Rubberbones catapult into the middle of the Collector's devious schemes. Drunken pirates, a kilt-wearing mechanical man and Queen Victoria come to their aid! Squabbling scientists, a bungling ex-jewel thief and other nefarious fellows hinder them!
1 Vote

Tweet
The Island of Mad Scientists review by TKono

"The Island of Mad Scientists" by Howard Whitehouse is a wild book, indeed. The stories of over ten characters are intertwined when an island used for scientific research comes into play. Not far from this island, the Collector spies on the scientists and kidnaps the ones he wants to hold prisoner. In the book, he is after two young avionics. The other characters in the book are are related to the kids, friends of the kids, or merely people the kids meet on their journey.