Inside the Mind of Gideon Rayburn 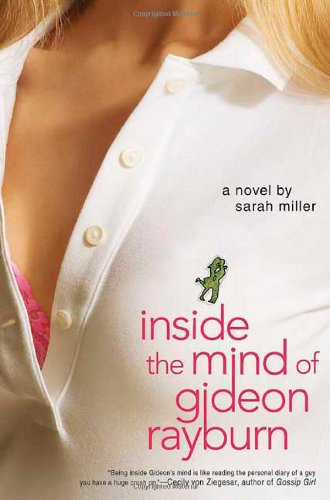 Inside the Mind of Gideon Rayburn
Sarah Miller
What if you could see inside the head of the guy you love?  Know his every thought?  Feel his every dream and fantasy?  The mystery girl who's Inside the Mind of Gideon Rayburn can. She tells us the intoxicating story of her beloved Gideon, an adorably clueless boy who flukes his way into New England's fanciest prep school.  Gideon's naïve compared to the wolves at Midvale Academy, especially Cullen and Nicholas, his charming, morally ambiguous roommates.  They welcome Gid by trashing his music and betting big on when he'll lose his virginity. Will he lose it with the cute and feisty Molly McGarry? Or Pilar Benitez-Jones, the most beautiful girl Gid's ever seen? Gid actually likes Molly and hooking up with her might be possible. But winning Pilar would be legendary. Gid is torn--he wants to prove himself to his roommates, but he also wants love. Through it all there is one hysterically funny girl sharing every thought in Gid's conflicted little mind. But who is she?
1 Vote

Tweet
Inside the Mind of Gideon Rayburn review by PS

Gideon Rayburn has a twist of fate when he mananges to secure a position in a fancy prep school. From day one, his life is completely changed. His new roommates, Cullen and Nicholas, influence him to do drugs, drink, and even make a bet for him to lose his virginity. With so many girls around, Gideon does not know how to act around them or who he really likes. Through the course of his first term of boarding school, he learns a lot about his personality and what is really important in relationships.