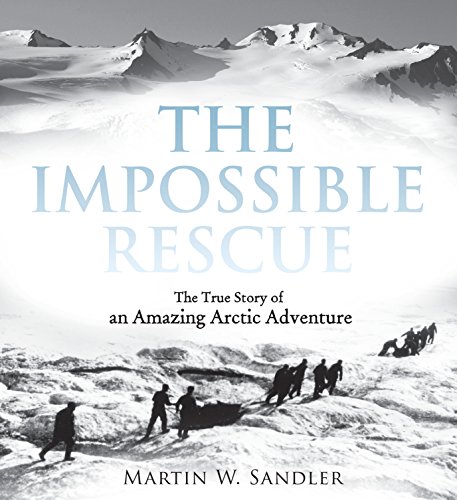 The Impossible Rescue
Martin W. Sandler
The dead of an Arctic winter. Whaling ships full of men, stranded in ice. Follow three rescuers in a race against time — and all odds — in this heartpounding true adventure.In 1897, whaling in the Arctic waters off Alaska’s coast was as dangerous as it was lucrative. And in that particular year, winter blasted early, bringing storms and ice packs that caught eight American whale ships and three hundred sailors off guard. Their ships locked in ice, with no means of escape, the whalers had limited provisions on board, and little hope of surviving until warmer temperatures arrived many months later. Here is the incredible story of three men sent by President McKinley to rescue them. The mission? A perilous trek over 1,500 miles of nearly impassable Alaskan terrain, in the bone-chilling months of winter, to secure two herds of reindeer (for food) and find a way to guide them to the whalers before they starve. With the help of photographs and journal entries by one of the rescuers, Martin W. Sandler takes us on every step of their riveting journey, facing raging blizzards, killing cold, injured sled dogs, and setbacks to test the strongest of wills.Back matter includes an epilogue, further information, a time line, source notes, a bibliography, and an index.
1 Vote

There was once a year in which winter came early. The year was 1897, when whaling in the Arctic was as perilous as it was lucrative. As the storms descended and the ice froze, eight whaling ships and the hundreds of sailors onboard became imprisoned in the ice. It soon became clear that the ships, with their supplies low, would not last the winter, until three men were ordered by President McKinley to go on a journey over 1,000 miles of deadly Alaskan terrain. They battled every hardship conceivable, and their objective was to save the starving men--and complete an impossible rescue.