I Was a Teenage Popsicle 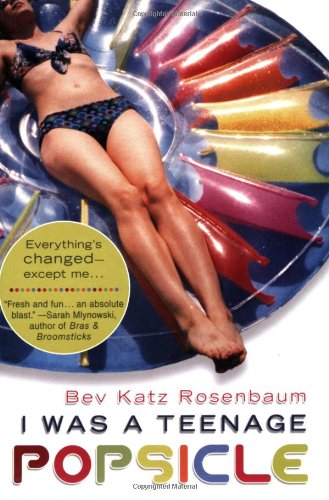 I Was a Teenage Popsicle
Bev Katz Rosenbaum
Floe Ryan was frozen - or 'vitrified' - at sixteen. She and her parents had a rare disease, so it was their only choice until a cure was found. Now she's been thawed and it's ten years in the future - but she's still a teenager. And her parents are still chilling out...So now her little sister is her older sister, and she's making Floe suffer for every snotty thing she ever did. It's hard getting used to... not to mention a new school, new technology, and a zillion other new things that happened while she was napping in the freezer. Luckily, she has Taz, the hottie skater boy who was a popsicle too, so they get to reintegrate together. But now they're trying to close the Venice Beach Cryonics Center - with Floe's parents still in it! It's up to her to save the clinic and her parents - so she can finally have a somewhat normal life.
2 Votes

Tweet
I Was a Teenage Popsicle review by ROrn

Floe Ryan&Frozen zombie or out-of-date freak? Floe was a girl of sixteen when she was "frozen." She and her parents contracted this strange disease called lympaticotosis, and the only option to come back to life after she had been declared "legally dead" was to be frozen, or vitrified. After a whole ten years, Floe is brought back to life again by the cyronics team (the people who do the vitrifying). With all that done, she must go through rehab. Along with her is totally hot Taz Taber. She has had a crush on him since before she was vitrified.

What's this?
I Was a Teenage Popsicle review by Little Willow

Imagine getting sick, falling asleep, and waking up to find out an entire decade has passed in the blink of an eye. That's what happened to sixteen-year-old Floe Ryan in the new book I Was a Teenage Popsicle. Floe grew very sick very quickly, afflicted with the same horrible disease that attacked her parents, who opted to be vitrified (frozen) until a cure was found. They froze Floe also, wanting their eldest daughter to be saved too. Ten years later, Floe is thawed out. She discovers that her younger sister is all grown up and that her parents are still vitrified.