I Am Alive and You Are Dead 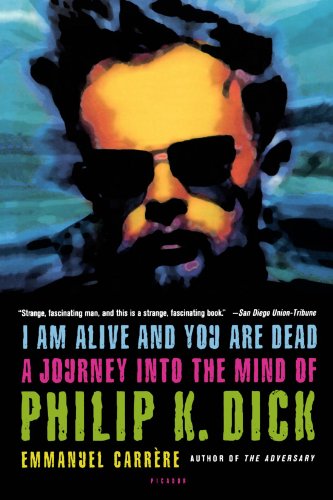 I Am Alive and You Are Dead
Timothy Bent, Emmanuel Carrère
For his many devoted readers, Philip K. Dick is not only one of the "one of the most valiant psychological explorers of the 20th century" (The New York Times) but a source of divine revelation. In the riveting style that won accolades for The Adversary, Emmanuel Carrère's I Am Alive and You Are Dead, follows Dick's strange odyssey from his traumatic beginnings in 1928, when his twin sister died in infancy, to his lonely end in 1982, beset by mystical visions of swirling pink light, three-eyed invaders, and messages from the Roman Empire. Drawing on interviews as well as unpublished sources, he vividly conjures the spirit of this restless observer of American postwar malaise who subverted the materials of science fiction--parallel universes, intricate time loops, collective delusions--to create classic works of contemporary anxiety.
1 Vote

Tweet
I Am Alive and You Are Dead review by VO

This book was a fascinating read about an author named Philip K. Dick who was a very uncommon breed. Carrere takes the reader through the journey of this man's life from the infant death of his twin sister, to the multiple marriages he experienced, to his upsetting lonely death. Throughout all of this, the reader learns of how involved the human brain can truly be, especially in the case of Philip K. Dick.