Hyacinth and the Stone Thief 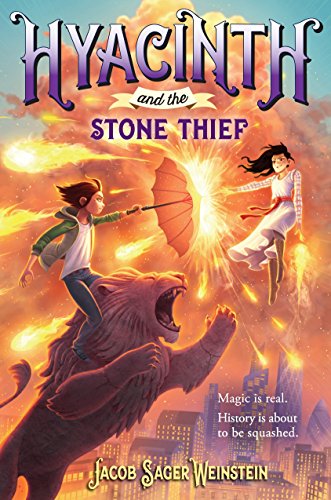 Hyacinth and the Stone Thief
Jacob Sager Weinstein
The hilarious second book in a middle-grade fantasy trilogy about the magical rivers that run through the sewers of London and shape history in ways you'd never learn in school.Magic is real. History is about to be squashed.Now that Hyacinth Hayward knows about the enchanted rivers under London, she's determined to find out more. Unfortunately, London isn't cooperating. Instead, Hyacinth stumbles on a new adversary--a girl who is trying to steal all the ancient stones that keep the city in balance. A girl with glowing, magical fingers, whose entire body is tattooed with spells. A girl called Minnie Tickle. (What? Were you expecting something more . . . fearsome?)To stop her, Hyacinth will need help from stone itself--specifically, a giant talking lion statue and his talking statue friends. Can this enthusiastic but scattered company defeat Minnie before London sinks like a stone?