The Hunt of the Unicorn 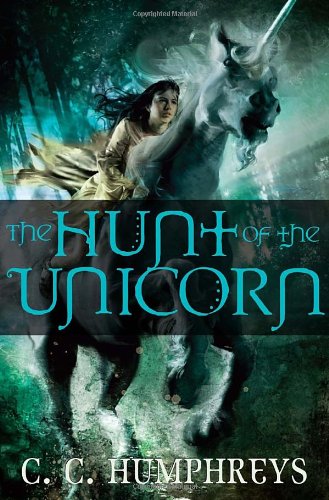 The Hunt of the Unicorn
C.C. Humphreys
Elayne thinks the old family story that one of her ancestors stepped through a tapestry into a world of mythical beasts makes a great fireside tale. But she lives in the real world. In New York City. And she's outgrown that kind of fantasy.Until she finds herself in front of a unicorn tapestry at the Cloisters museum and sees her initials woven into the fabric. And hears a unicorn calling to her. And slips and falls—into that other world.Suddenly the line between fantasy and reality isn't so clear. But the danger is real enough. Almost before she can think, Elayne is attacked by a ferocious beast, rescued by a unicorn, and taken prisoner by a tyrant king. Each of them seems to have an idea about her—that she's a hero, a villain, dinner!But Elayne has a few ideas of her own. She wants to overthrow the king; she wants to tame the unicorn. She wants to go home! And she's willing to become both hero and villain to do it.
1 Vote

Tweet
The Hunt of the Unicorn review by CLi

Elayne has lost all hope for her father's recovery as he battles leukemia, and it is with a feeling of defeat that Elayne sits down with him one night and cracks open the old volume entitled The Maid and the Unicorn. Elayne reads of the story of the magical weaver Francois Robochon, his daughter and her namesake Alice-Elayne, and the escape from Goloth, Land of the Fabulous Beast on the back of a unicorn. Even as Elayne scoffs at the fantastical story, her father insists on its authenticity and presents a supposed unicorn horn passed down from Elayne's ancestor to her as a gift.