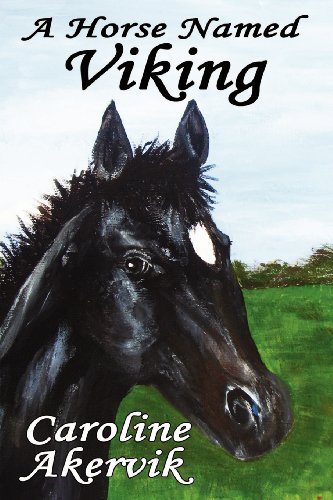 A Horse Named Viking
Caroline Akervik
A rogue. An outlaw. An unlikely hero. Viking is the sole offspring of a savage and vicious mare. The colt is the pride of the stable until his dam kills a groom in her stall. Viking is a painful reminder of the tragedy, and so he is sold off. The black colt has a coarse face and a mean curl to his nostrils, but he is beautifully proportioned with magnificent gaits. With his teeth and thick weapon of a tail, Viking brutalizes everyone who handles him and humiliates the best trainers in the world until Anne O'Neil tries him. The first time she rides him, she declares she will not buy him if he was the last apple in the barrel. The second time, she rides him as if he is as sensitive as one of her Thoroughbreds, and she is amazed by the results. Kindness and sugar turn out to be the keys to Viking's heart. Viking and Anne become rising stars until a cruel and brutal trainer seeks to crush his spirit. A Horse Named Viking follows the life journey of an incredible, unforgettable horse.
1 Vote

A Horse Named Viking is about a Danish Warmblood colt, Viking, whose dam (mom), Carpia, was put down because she defended her foal against Ulrik, a drunken groom (stable boy) who attacked them. Viking was not yet weaned at the time, and after Carpia’s death, Viking stops eating and nearly dies. When he recovers he is sold by Kurt, his owner. After Viking has been passed through several owners and a top-class sale barn, he is bought by Anne O’Neil, an American Olympic/Grand Prix (the highest level of dressage) rider who bought him as a last resort.