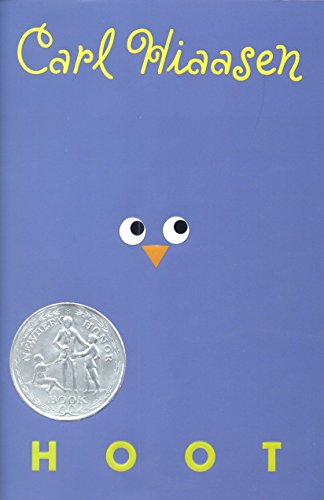 Hoot
Carl Hiaasen
Roy Eberhardt is the new kid--again. This time around it's Trace Middle School in humid Coconut Grove, Florida. But it's still the same old routine: table by himself at lunch, no real friends, and thick-headed bullies like Dana Matherson pushing him around. But if it wasn't for Dana Matherson mashing his face against the school bus window that one day, he might never have seen the tow-headed running boy. And if he had never seen the running boy, he might never have met tall, tough, bully-beating Beatrice. And if he had never met Beatrice, he might never have discovered the burrowing owls living in the lot on the corner of East Oriole Avenue. And if he had never discovered the owls, he probably would have missed out on the adventure of a lifetime. Apparently, bullies do serve a greater purpose in the scope of the universe. Because if it wasn't for Dana Matherson... In his first novel for a younger audience, Carl Hiaasen (Basket Case, etc.) plunges readers right into the middle of an ecological mystery, made up of endangered miniature owls, the Mother Paula's All-American Pancake House scheduled to be built over their burrows, and the owls' unlikely allies--three middle school kids determined to beat the screwed-up adult system. Hiaasen's tongue is firmly in cheek as he successfully cuts his slapstick sense of humor down to kid-size. Sure to be a hoot, er, hit with middle school mystery fans. (Ages 10 to 15) --Jennifer Hubert
1 Vote

Hoot is a great book about a boy, Roy, who moves to Florida. Roy becomes friends with a running boy who plans to stop the destruction of owl burrows on an empty lot scheduled to be the next site of a Mother Paula's Pancake House.

What's this?
Recommended Books
To add your comments, login above or request a LitPick membership.

Leftydog1
I read this and it was AMAZING!
3 years 8 months ago
LITPICK and YOU
Reviewers improve reading & writing
Authors get reviews, videos, social media, & more
Find great books and start book clubs too!
TELL ME MORE!
RECENT BOOK REVIEWS
SHOW ME MORE!