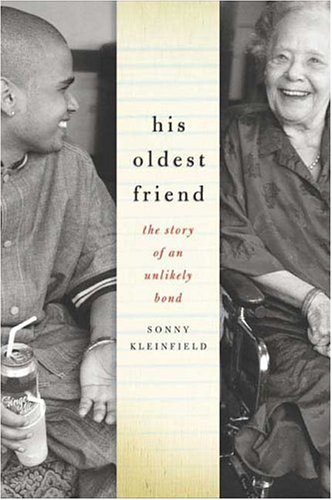 His Oldest Friend
Sonny Kleinfield
A vivid portrait of an uncommon friendship that spans generations, uniting the wisdom of youth with the spark of old ageThey met under the least auspicious circumstances. He was a teenage volunteer at a nursing home on the Upper West Side of Manhattan. She was a wheelchair-bound resident in her nineties. He was poor, Hispanic, living in a rented room in the barrio, separated from his family. Her life, at least before arthritis hobbled her, was comfortable, and her daughters and grandchildren visited as often as they could. But when Margaret Oliver’s daughter hired Elvis Checo to look in on her mother a few afternoons each week, nobody realized that this would be the beginning of a beautiful friendship.In His Oldest Friend, Sonny Kleinfield of The New York Times takes us inside the lives of these two unlikely friends to explore the world of the very young and the very old, showing how underappreciated these groups often are—a mystery to one another and to so many of us in the middle-class adult population. Too often we tend to group together “youth” and “the elderly,” submerging individuals into a group identity. But Elvis and Margaret offer each other that rarest of gifts: recognition and affirmation as a unique human being. Kleinfield opens their lives to us, and shows how their bond of friendship rescued each of them from the bleakness that defeats so many of the youngest and oldest among us.
1 Vote

When Elvis started volunteering at the nursing home, it was to keep out of trouble. He was a poor, Hispanic young man living in a not- so safe neighborhood in New York City, and everyday just trying to stay alive. But when Elvis is hired look in on Ms. Oliver, a resident of the home, their weekly check-ups gradually turn into daily visits, and a rare and strong relationship is formed. While Elvis brings light into Ms. Oliver's dull world at the nursing home, she gives him the strength and wisdom to better his life day by day.