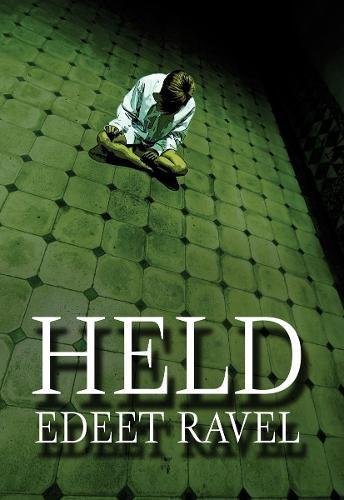 Held
Edeet Ravel, Gareth Williams
Seventeen-year-old Chloe’s summer vacation in Greece comes to an abrupt end when she is suddenly bound, gagged and whisked away to an unidentified location. Waking up from a drug-induced sleep, she finds herself in a squalid warehouse. Chloe can only imagine the worst. After several days of total isolation and utter despair, Chloe faces a new threat when her kidnapper appears, but she also feels a sense of relief. His revelation that she is being held as ransom for a prisoner exchange, however, does little to allay her fears. The weeks pass and, haunted by terrifying dreams and with only her thoughts to keep her company, Chloe fights to remain calm in an impossible situation. At least her kidnapper, although cold and distant, visits frequently, often bringing gifts. Before long, Chloe begins to have feelings for him that take her by surprise. Though still fearing for her safety, she now fantasizes about a life together. And is it her imagination, or does her captor share those feelings? Even when she is finally released, Chloe vows to protect her captor at any cost. This powerful psychological thriller leaves readers wondering at every suspenseful turn: Is Chloe experiencing Stockholm syndrome?
1 Vote

In Held, by Edeet Ravel, a seventeen year old girl named Chloe is kidnapped while volunteering in Greece. Locked away in a mystery location, she is terrified and lonely. It is not surprising that when one of her hostage-takers appears, friendly, handsome and apologetic, Chloe begins to have feelings for him.