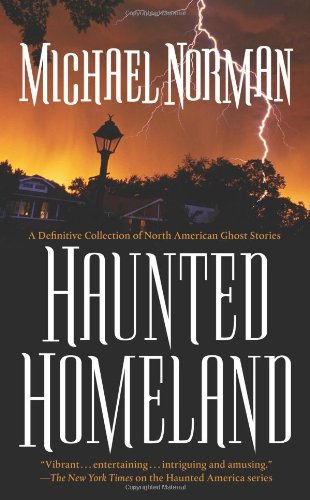 Haunted Homeland
Michael Norman
Trapped miners from cave-ins long ago still calling for help.Ghostly women lurking in the shadows of city streets.Spectral holy men and outlaws from America's Spanish past making appearances in our modern age. They are all citizens of Haunted America, and this is HAUNTED HOMELAND.From a haunted castle in the wilds of Alaska to phantom clergymen in the Southwest and mysterious bouncing lights on the East Coast, this latest volume covers the places, the people, and the things that belong to the earthbound realm of the fantastic. Michael Norman has gathered together spectral events of all kinds--apparitions of the famous like Mary Surratt, Mary Todd Lincoln, and Mad Anthony Wayne; haunted crime scenes in Chicago and along the Indiana byways; as well as banshees, poltergeists, and even a ghost named George who has become an accepted resident in a house in North Carolina.Some of these tales date back to America's early days, such as the screaming woman of Marblehead, Massachusetts, while others rise from more contemporary sources, like noted mystery writer Mary Robert Rhinehart's encounter with ghost at a house on Long Island.A ghostly Supreme Court Justice, a specter known as The Texan, an abandoned Canadian bride reminiscent of Dickens's Miss Haversham, and many others make an appearance in this latest chronicle of the Haunted American landscape.
2 Votes

Seen a ghost? Then perhaps your tale, along with others, is in Haunted Homeland. This book is about American and Canadian ghost stories. Crammed with detail, it tells not just about the ghost, but also about all the accounts of everyone claiming to have seen it. It includes lists of when those particular people were born, and when they died. It even lists how they died. Its grim facts can chill to the core, as you read spooky tales about ghosts and phantoms, poltergeists and specters.

The Haunted Homeland by Michael Norman is the book I chose to write my book review on. It is a book with different types of "scary" stories, most of them reinactments of other fantasy stories. This book was not made up of true stories. They were fantasy stories. Yet before the stories they would have information on how they found out the stories were "real life." It is sort of like a mystery book that tells you to much information to guess what is going on by yourself, the result of the book.