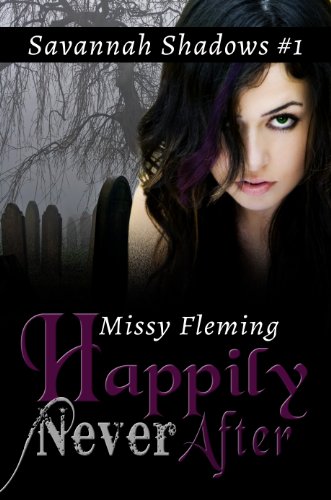 Happily Never After
Missy Fleming
There's no such thing as happy endings.Savannah, Georgia is rumored to be the most haunted place in America. Quinn Roberts knows it is. She's felt the presence of spirits her entire life, investigating and photographing them with her best friend. Only none of those encounters ever turned violent, until now. The menacing darkness feeding off her stepmother has promised she won't live to see her eighteenth birthday.After a chance meeting Quinn reluctantly allows actor Jason Preston into her life, which has complications of its own. She's not used to letting people get close. Falling for him while fighting for her life, and her family's legacy, only complicates things more. Jason shows her exactly what she stands to lose, especially when she's being attacked by the mysterious entity. Each attack is more violent and terrifying than the last.With Jason's help, she dives into the Roberts' family history, searching for a link between a woman who went missing a hundred and fifty years ago and what's happening now. What they find is a brutal murder and that the ghost doesn't just want to hurt Quinn, it wants revenge.It wants her life.
1 Vote

This story is a paranormal twist on the fairy tale Cinderella. You have a girl, Quinn, whose life is hard with an evil stepmother and two equally evil stepsisters. Quinn has the ability to see ghosts everywhere in her small Savannah, Georgia town and is only days away from her 18th birthday where she gets her family house and fortune. But her evil stepfamily is making it difficult to wait. The evil stepmother is just half a villain in this suspenseful romance, though. A previous owner of the house over 100 years ago is seeking revenge on Quinn.